This Dioula-French-English-German dictionary is the result of much effort on the part of members of the community and those who came alongside them.

Some people describe Dioula as a simpler language or trade language of Bambara while others say that Dioula is related to Bambara as American English is related to British English. Some consider Dioula, Bambara and Malinke as the same language, implying that Dioula describes the same language in Côte d'Ivoire and in Burkina Faso and that Bambara and Malinke are names for the same language used in Mali. But, linguists consider each one as a distinct language, clearly identified as three languages of the Mandé family. Dioula is spoken by around 12 million people, 3 million of them live in Burkina Faso, the rest in the neighbouring countries.

For most speakers in the southwest of Burkina Faso, the Dioula language is not their mother tongue, but is spoken readily in their daily life with people of other ethnic groups. It is very important as a trade language. 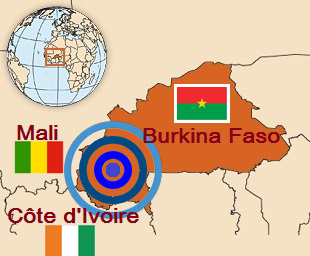 In Burkina Faso, the Dioula alphabet has 28 letters each symbolizing a single sound (phoneme). In the orthography, the long vowels are represented by two consecutive vowels. For example, /e/ is written "e" and /eː/ is written "ee". The nasalization of a vowel is shown with an "n" after the vowel. For example, /ẽ/ is written "en".

Tons are not written on vowels except in lexical documents. However, in certain cases, vowels will be shown with their tone marks to avoid ambiguity.
For example: