3. Word boundaries and spelling
It is not always easy to determine the boundaries of words and their spelling forms in Lagwan. In everyday language, there are many shortenings and elisions of vowels. For example, we often hear in the market riyaxkan or even raxkan instead of riyal xkan fifty francs. How to represent these words in writing? We offer two principles to help us determine the limits and forms of words in Lagwan. After presenting these principles, we will consider how to write the most important grammatical elements of the language.

First, a word is spelled only one way (Stark 2010: 156-157). That is to say, it has only one written form. Most often, the way a word is written follows the pronunciation of that word in isolation. In the case of riyaxkan and riyal xkan fifty frances, to keep only one way to write these words, it is better to write them riyal xkan. In the case of elision, you have to write words as they are pronounced in isolation. For example, we often say slaɗɨ main and then slaɗa u my hand. However, to respect the first principle, they should be written as slaɗɨ a u my hand. Second, a word that has its own meaning is written as one word and is not attached to other words. (Stark 2010: 155-56). For example, a possessive adjective, like au ma or mine in the previous example slaɗɨ au my hand, consists of two words that have their own meanings: a is a connective particle that indicates possession and then u is a possessive pronoun which indicates the person and the number of the possessor, in the first person singular.

In Lagwan there are several series of personal subject pronouns that precede a conjugated verb. These pronouns indicate the gender and number of the subject as well as the tense and aspect of the action of the verb (Aboukar 2003, Allison 2006: 7). In general, we suggest writing these pronouns as separate words. We take a look at the five most important subject personal pronoun sets and suggest spelling forms.

Personal Subject Pronouns of the Imperfect Tense
Personal pronouns subject of the imperfect tense have the following forms: 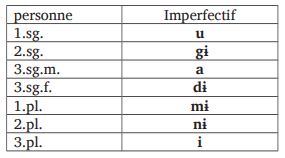 We propose to write them as separate words. 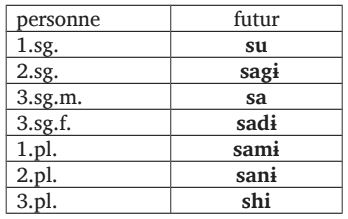 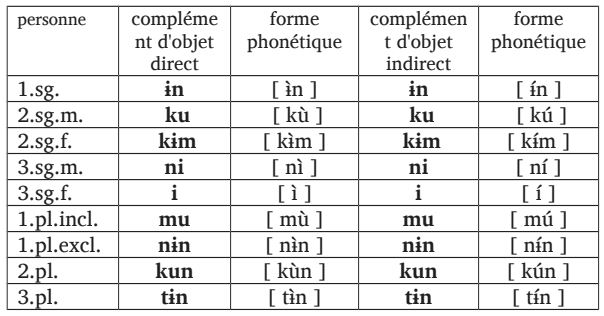 The object complement pronouns follow the verb directly. We write them as a separate word. 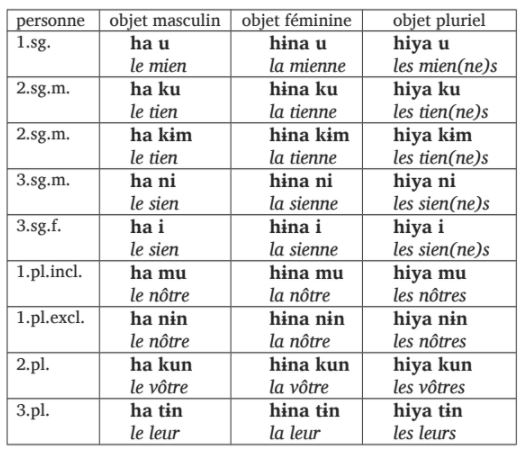 Note that we write these pronouns as two separate words, the connective particle and then the possessive pronoun. Our proposal follows the principles for determining the limits and shapes of words. By writing ha u, hɨna u, and hiya u, we respect the principle that a word is spelled only one way. In addition, by writing them as two separate words, we respect the second principle which states that a word that has its own meaning is written as one word and is not attached to other words.

3.2 Noun phrase
In Lagwan the noun phrase is characterized by several kinds of vowel elision and word size reductions. To write noun phrases in a systematic way, we offer the following spelling forms and writing rules. 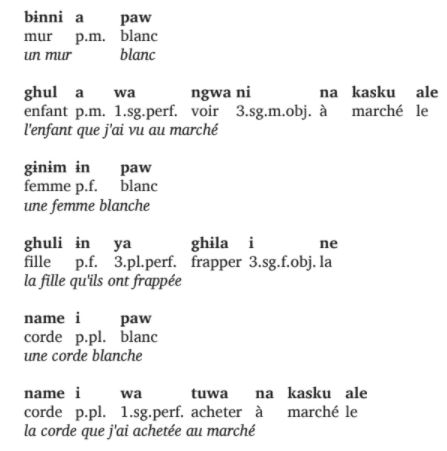 Note that these particles are written as a single word which is separated from the noun that precedes it and the modifier that follows it by a space.

3.2.3. Definite articles.
The definite articles follow the noun which they modify. These articles agree with the gender and number of the substantive. In case the noun is masculine singular or plural, the article is ale. In the case of a feminine noun, we use ne. We offer the following spelling forms for defined adjectives.

By writing bɨnni a Mana the wall of Mana and then bɨnni a u my wall, we respect the principle that a word is spelled only one way. On the other hand, if we wrote the possessive adjective as a single word, that is to say, au to me, we would be obliged to write the connective particle as a word except when it follows a noun, like writing. In addition, by writing connective particles as separate words, we respect the second principle which dictates that a word with its own meaning is written as a single word and that it is not attached to other words. 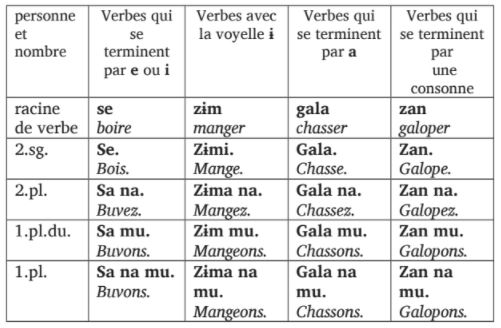 The imperative of the verb gɨr go is irregular. We offer the following spelling forms. 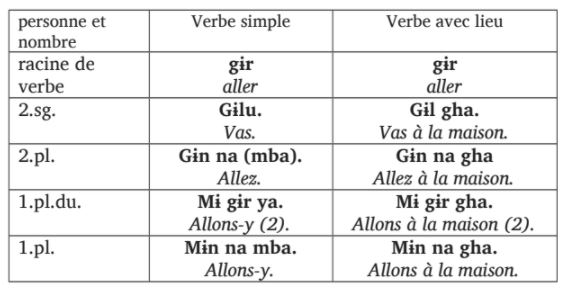 The reflected particle zi, like the se in French, expresses the idea of a reflected action. This particle follows the verb.

In Lagwan there are directional particles which specify the meaning of a verb. Even though they sometimes function like adverbs, they are closely related to verbs. Among the most common directional particles are watin on the ground, ghwaa at the top, fine outside, and vɨn inside. We propose to write these particles as separate words.

The verbal particle he follows a transitive verb. 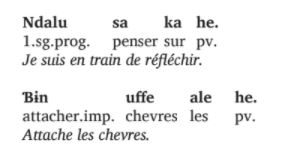 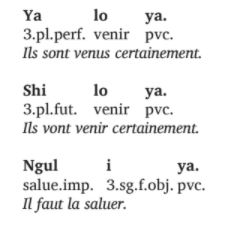