1. Introduction
Developing the alphabet for a given language requires phonological analysis to establish sounds that are distinctive, i.e., phonemes. Then, you have to choose a symbol or graph for each phoneme of the language. We present the Lagwan alphabet proposed by Sean Allison in collaboration with Marouf Brahim, Mamat Abama, and Moumoune Mademe. We also offer a Lagwan spelling system, that is, principles that govern the use of the letters of the alphabet. This account of the Lagwan alphabet and spelling is provisional. This spelling must be used to bring out problems that we should find and resolve in order to arrive at a more definitive spelling.

In this presentation, the phonetic symbols are taken from the International Phonetic Alphabet (API). Any phonetic pronunciation is surrounded by square parentheses [am] am eau ou [ʁa?a] ghaa maison. The letters of the Lagwan alphabet, i.e., the graphemes, are always written in bold characters and the French translation is shown in italics: am eau ou ghaa maison.

2.1.1. The consonants of the Lagwan alphabet.

The following table shows the twenty-four consonant graphemes of the Lagwan language. After each grapheme or letter in the table, is the phoneme that serves as the linguistic base for the alphabet that we are proposing. The examples in the table show the graphemes in word initial and then word medial. 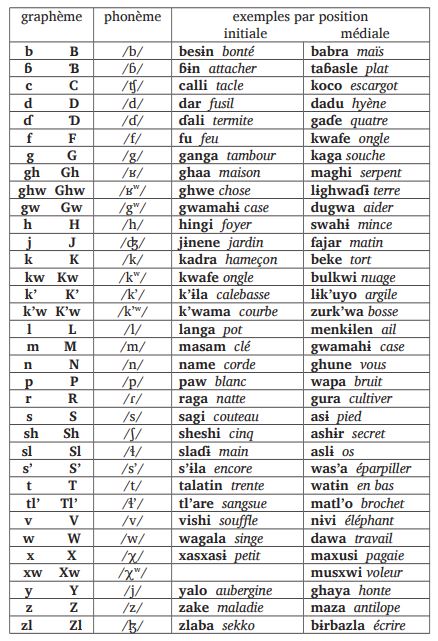 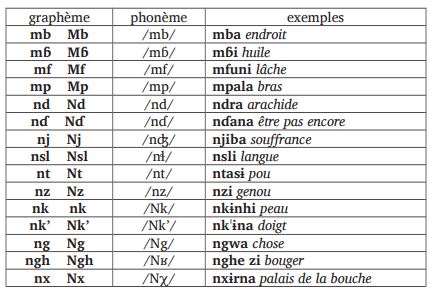 Although the nasals found word initially in a two-consonant sequence are syllabic and therefore sound differently from other nasals, we suggest writing nasals in all positions the same way. It is not worth the trouble to write syllabic nasals in a particular way because we can predict the presence of a syllabic nasal by looking at its position in a word.

The following table shows the six vowel graphemes as they are presented in the alphabet. The examples in the table show these graphemes in word initial and then word medial position.

2.3 Alphabetical order
The Lagwan alphabet which consists of forty graphemes appears in the following order in the alphabetized lists :

2.4 The choice of graphemes

We suggest following the guidelines of the general alphabet of Cameroonian languages and the international phonetic alphabet (API) (Tadadjeu & Sadembouo 1984, Wiesemann et. al. 2000). By following their guidelines, the Lagwan alphabet is accessible to Lagwan speakers who already read in French or another European or Cameroonian language. In addition, for those who cannot read at all, this alphabet can prepare them for learning French later.