The orthography of a language includes the guidelines for writing the words. For practicality it is suggested that there is one symbol (or a unique combination of symbols) to represent each distinctive sound occurring in the language; thus, this involves a one-to-one correspondence with no additional symbols for the same sounds. The one to one nature of the orthographic system results in contrastive pairs for words which differ by one letter representing one sound. We call these minimal pairs; these are used to prove the set of existing sounds.

Thus, in Nawdm, d and r contrast in certain words:

Nevertheless, in Nawdm, certain sounds are symbolized by two-letter combinations. These are:

In the Nawdm orthograpy, there are several sounds that do not exist in French, showing proof that Nawdm is in fact different from French. Note, these consonants do not exist in French, but do in Nawdm: gb, gw, kp, kw, ɦ, ŋ, ŋm. (Note that for English, the sounds made by gw, kw, ɦ, ŋ do exist, but they are represented by other letter combinations, except for h.)

The vowel "u" in Nawdm corresponds to the French ou".

When you hear an extended vowel in pronouncing a word in Nawdm, it is written as a double vowel. This is known as lenthened vowels. Every vowel in Nawdm can be lengthened, or doubled.

A special consonant in Nawdm is the ɦ which is distinct from French and consists of an abrupt break in air flow, giving the impression that the vowel becomes stronger or more clear. The ɦ is a veritable consonant that occurs at the beginning, middle, or end of a word.

Vocalic release in Nawdm is the sound of a short additional vowel pronounced within words or at the end of words. It occurs only in verbs, nouns, and pronouns, but is not written.

Remember that this release feature only occurs with consonants.

Tone in Nawdm has functionality in written as well as in spoken form. There are two distinct tones in Nawdm: high tone marked with the acute accent (ˊ) and low tone maked with a grave accent (`). Tone has a high grammatical function in this language, distinguishing verbal aspect and also for rendering a phrase correct. For example:

With tone marking, we can distinguish one word from another. For example:

In the orthography, only the pronouns are written with tone marks; these markings on the pronoun enables us to determine the tonality of the entire phrase.

In the dictionary, all the tone markings within brackets after the word enable the reader to correctly pronounce the words.

5.  Les letters of the Nawdm alphabet

The letters of the Nawdm alphabet are displayed in the columns in the second chart below. The letters are listed in alphabetical order, showing both upper and lower case letters. In addition, in order to show the difference between two consecutive consonants of a word and one consonant sound represented by two letters, the first consonant of a combination is marked with a trema. In the small chart below, the words that include consonant combinations are marked with a trema on the first consonant. These words are followed by their counterparts which include distinct consecutive consonants: 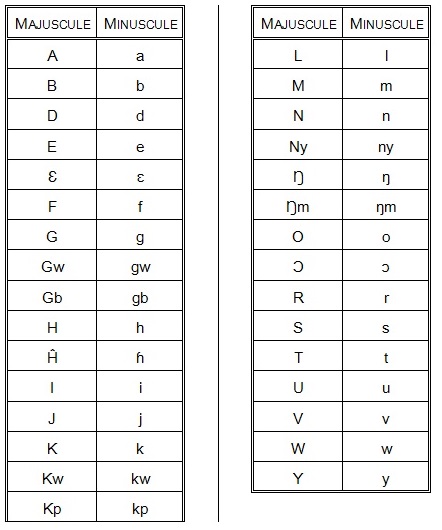 The letters just described are those that are used to write words in Nawdm. These letters, or orthographic symbols, represent phonemes. The orthography of the words is based essentially on the phonology of Nawdm, except for a couple of adjustments due to morphology features of this language. Thus, a morpheme or a phoneme can be pronounced differently depending on its position in the word (beginning, middle, or end), or vary the pronunciation according to the dialects. This phenomena creates great difficulties in the standardization of the orthography of words. Nevertheless, we feel obligated to add the following standardization rule: every one letter or two-letter combination is retained in the orthography which each reader of each dialect needs for pronouncing their phonemes.

7.  The orthography of compound words

In Nawdm there are two kinds of compound words.

1.  It is possible to form compound words with two or more root words, but only one class suffix is needed. The compound word is written as one word.

In the Nawdm word above, there are two root words baŋ- palm tree, and kpaa- oil, with the class suffix –m.

2.  There are also compound words in Nawdm comprised of two root words of which the first one can occur independently. In this case, we write the words separately.

All the compound words that have an independent root word are written separately, even if they are defined by one word in French.

Nawdm, in general, uses most of the same punctuation marks as in French. However, there is a difference for questions and exclamations. Nawdm uses two question marks in each sentence, one inverted at the beginning and the other at the end, as opposed to one in French. See the example below:

Also note that Nawdm may use another punctuation mark following a question mark when the sentence continues. See the following example:

Ĥá gbaam-wu na ¿ fɔg̈wii ba tee ?, n gɛt ka ked. ... He asked him: where is this woman? And he continues on his journey.

The exclamation point is used in two cases in Nawdm: at the end of an imperative phrase and after interjections.

The hyphen has a special use in Nawdm and is used in two cases:

1.  Between a verb and an (or several) object pronoun:

2.  In the plural imperative:

[1] In the Siou dialect, the vowel written as e is more closed and relaxed, and corresponds to the vowel [ɪ] of the International Phonetic Alphabet.

[2] In the Siou dialect, the vowel transcribed o is more closed and relaxed, and corresponds to the vowel [ʊ] of the International Phonetic Alphabet.