The term ‘Frafra’ is often used to designate the cluster of dialects of which Gurene, Nankani, Booni and Ninkare are members. There is a considerable degree of mutual intelligibility among these dialects. 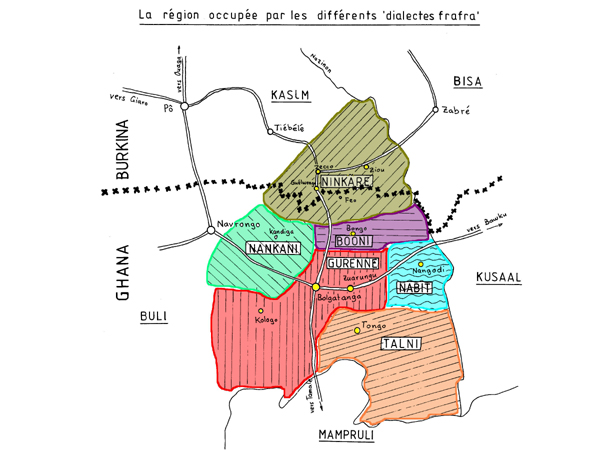 The different «Frafra» dialects in Burkina Faso and in Ghana.

The Ninkare region in Burkina Faso is located in the country's south-eastern corner, in the province of Nahouri, about 200 km from Ouagadougou. However, the great majority (over 90%) of this ethnic group is found in northern Ghana.

The traditional religion continues to have a very strong influence among the Ninkarse. Christianity and Islam were only introduced after the middle of the 20th century.

Terms used to refer to the language and its speakers are:

Concerning the economy, the Ninkare speaking population is heavily agrarian. A large majority of families are involved in subsistence farming. The major crops are millet, corn, beans, groundnuts and rice. They also raise cattle, goats, sheep and fowls. There are also many traders since they live near the border with Ghana.

There is very little existing research on the Ninkare language; some scholars have done studies on parts of the phonology and the grammar. Most of these studies were done in Ghana where the language is called Farefare or Gurenne (there are lots of variations in the spelling of this name by the different authors).

Eugene Ludwig Rapp (1966) described the main grammatical features of the language in Ghana, and his work written in German almost fifty years ago is the first published material on Gurenne. Beginning in the 1970s, Robert Schaefer worked on the language and published a phonology sketch (1975). He also published several literacy books and helped to translate the Bible into this language. Mary E. Kropp Dakubu produced various publications on different aspects of Gurenne such as ‘A Grammar of Gurune’ (1995), an article on the particle la (2000), and an article on the interrogative structure (2003). The first thesis on Gurenne was written by Ephraim Nsoh on some aspects of word-structure (1997). Another thesis was written by Samuel Atintono on the morphosyntax of the verb (2004). Both authors are mother tongue speakers of the Gurenne language in Ghana. These last three authors together published a ‘Gurenɛ – English Dictionary’ (Dakubu et al., 2007).

All of the above mentioned studies were conducted in Ghana. The first brief study on the Gurenne dialect called Ninkare or Nankam spoken in Burkina Faso was done by Andre Prost ‘Le gurenne ou nankan’ (1979). Urs and Idda Niggli (known as Awẽnnɛ la Awẽnpɔka) elaborated literacy materials and some basic literature. They also wrote a phonology description, an orthography guide, a grammar description and a dictionary for the Ninkare dialect spoken in Burkina Faso. These documents are available in French at https://www.kassena-ninkarse.org/burkina-faso/ninkare-francais.html.