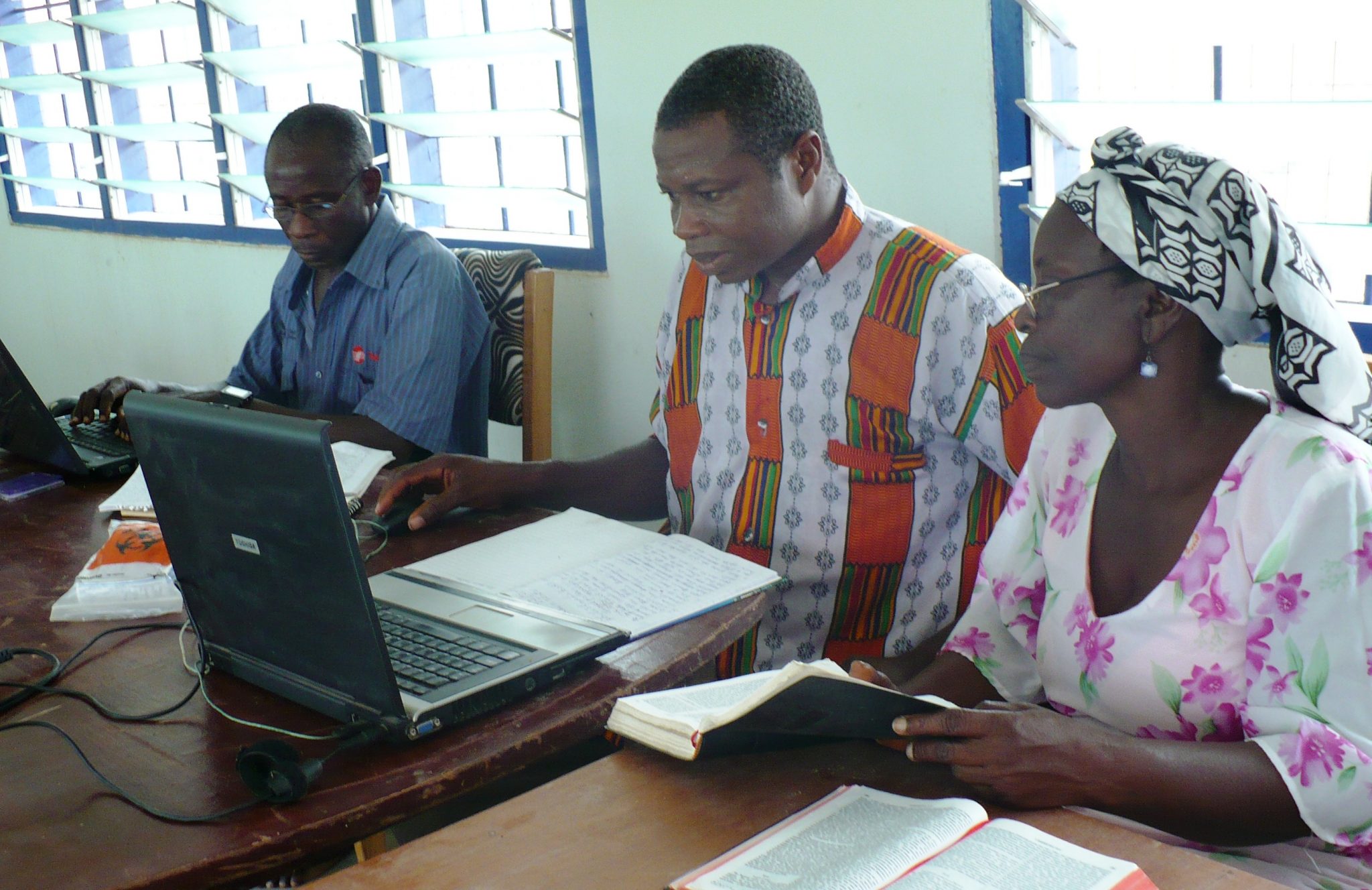 Some of the Nkonya Language Project staff working in the office 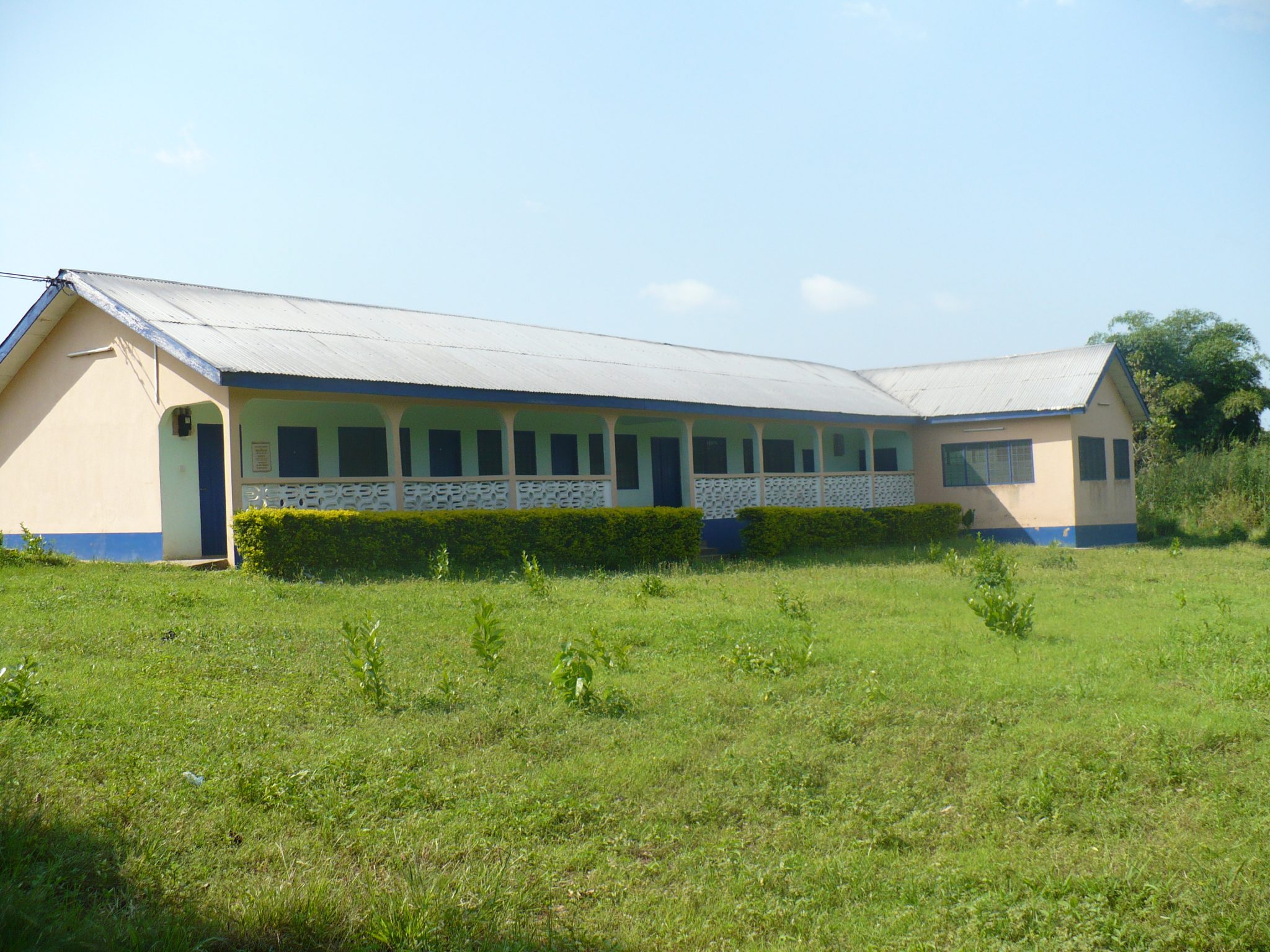 The Nkonya Language Project Offices, across the road from Nkosec.

Some Common Activities in Nkonya

Making and Using a Hearth 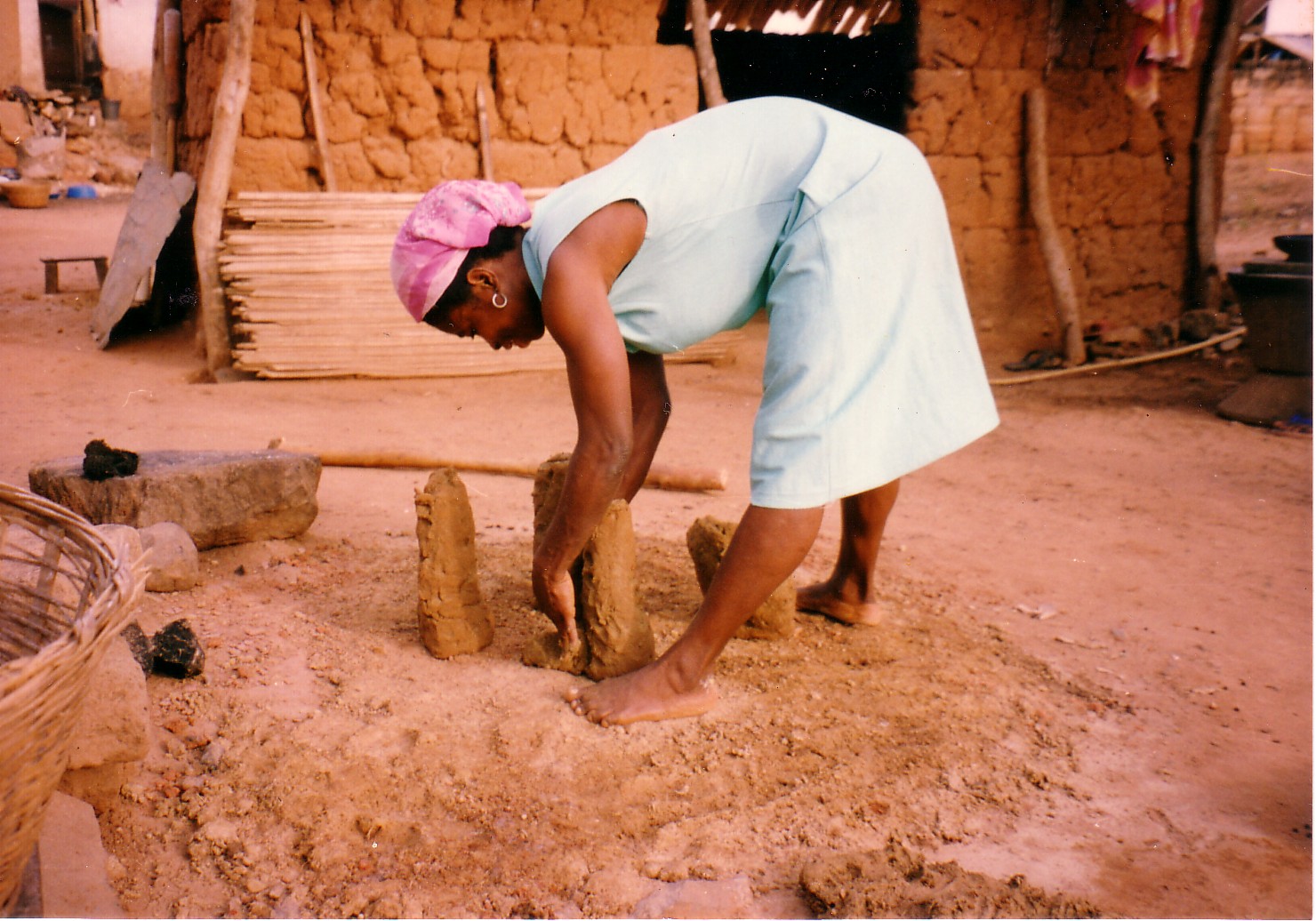 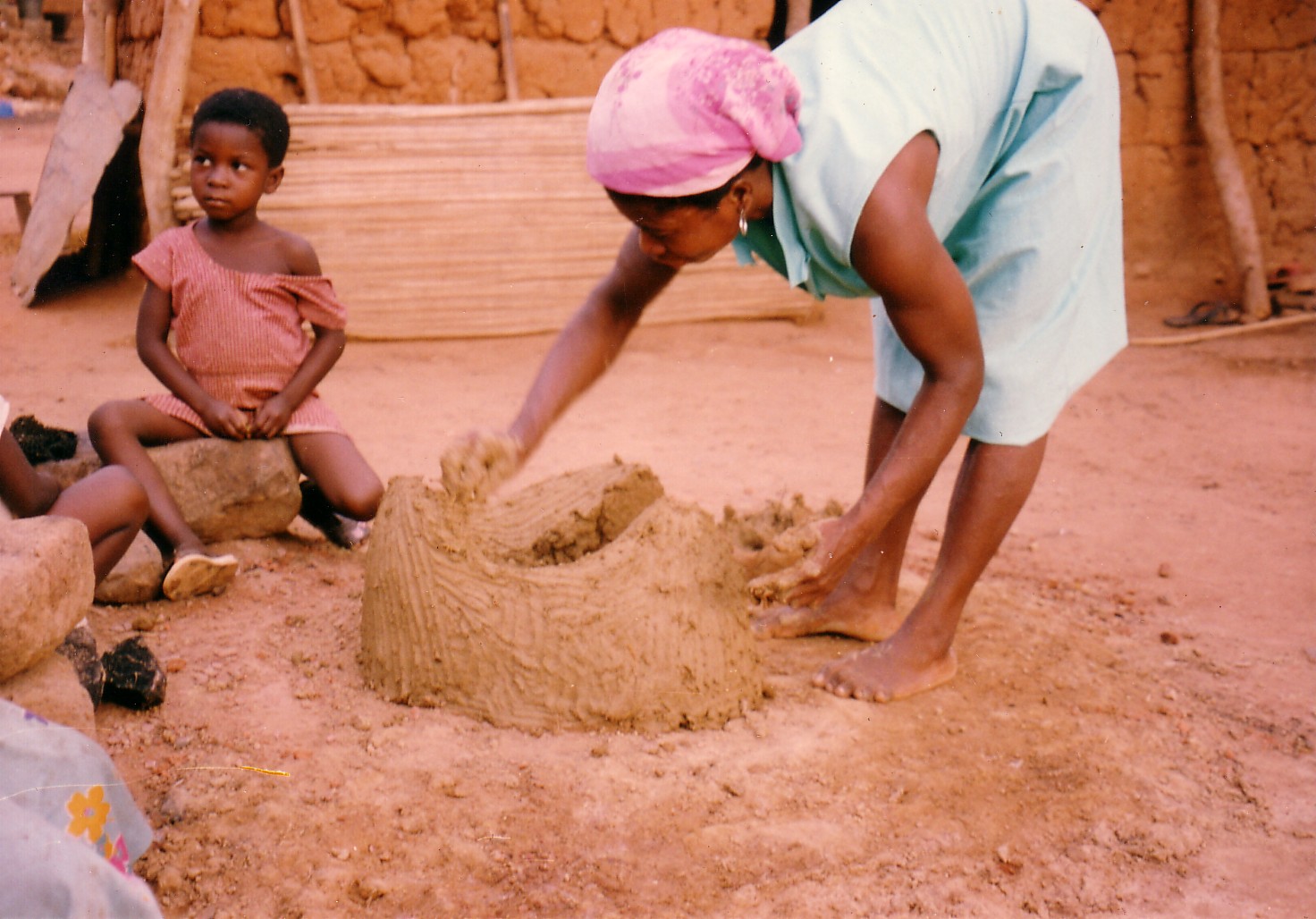 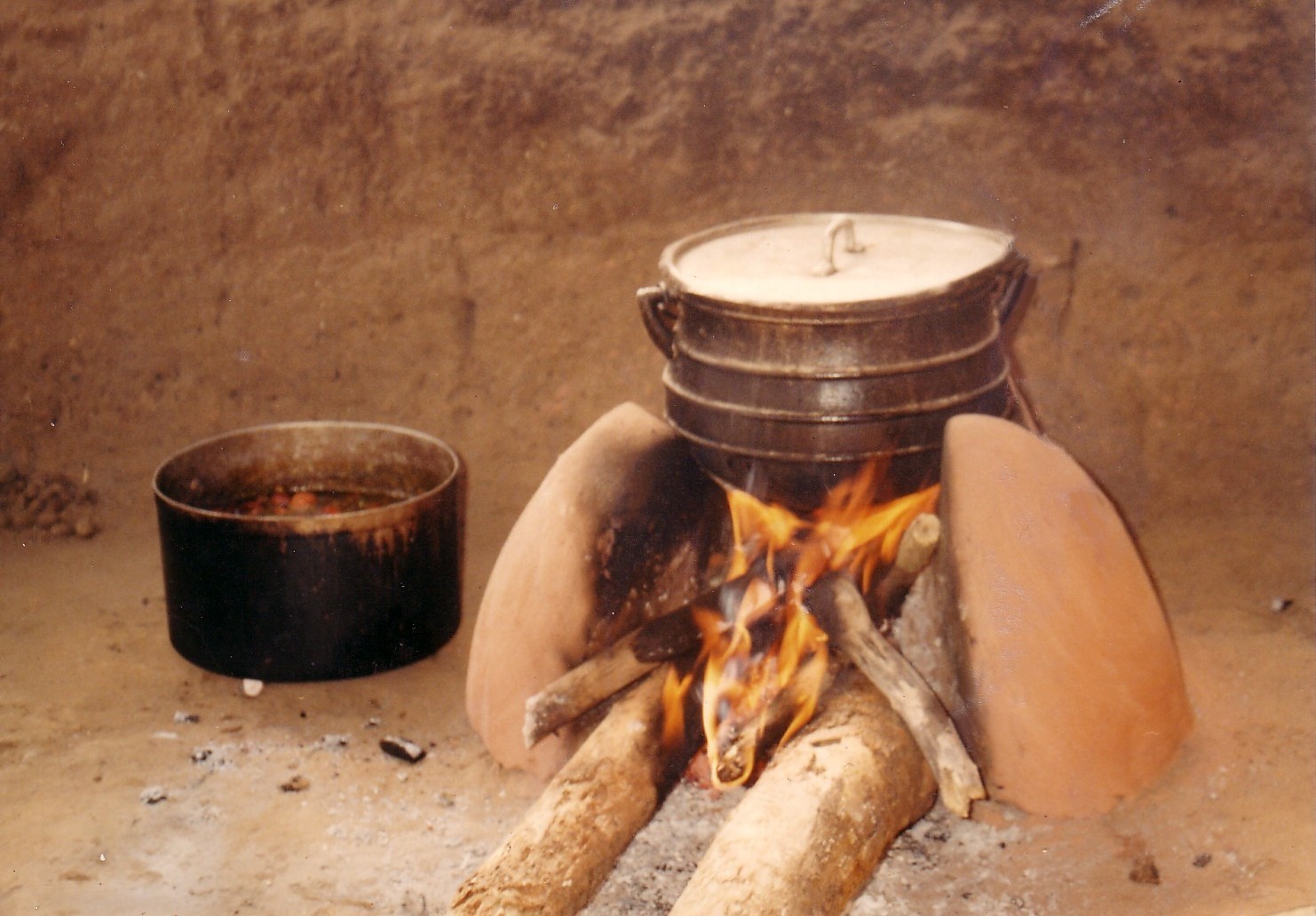 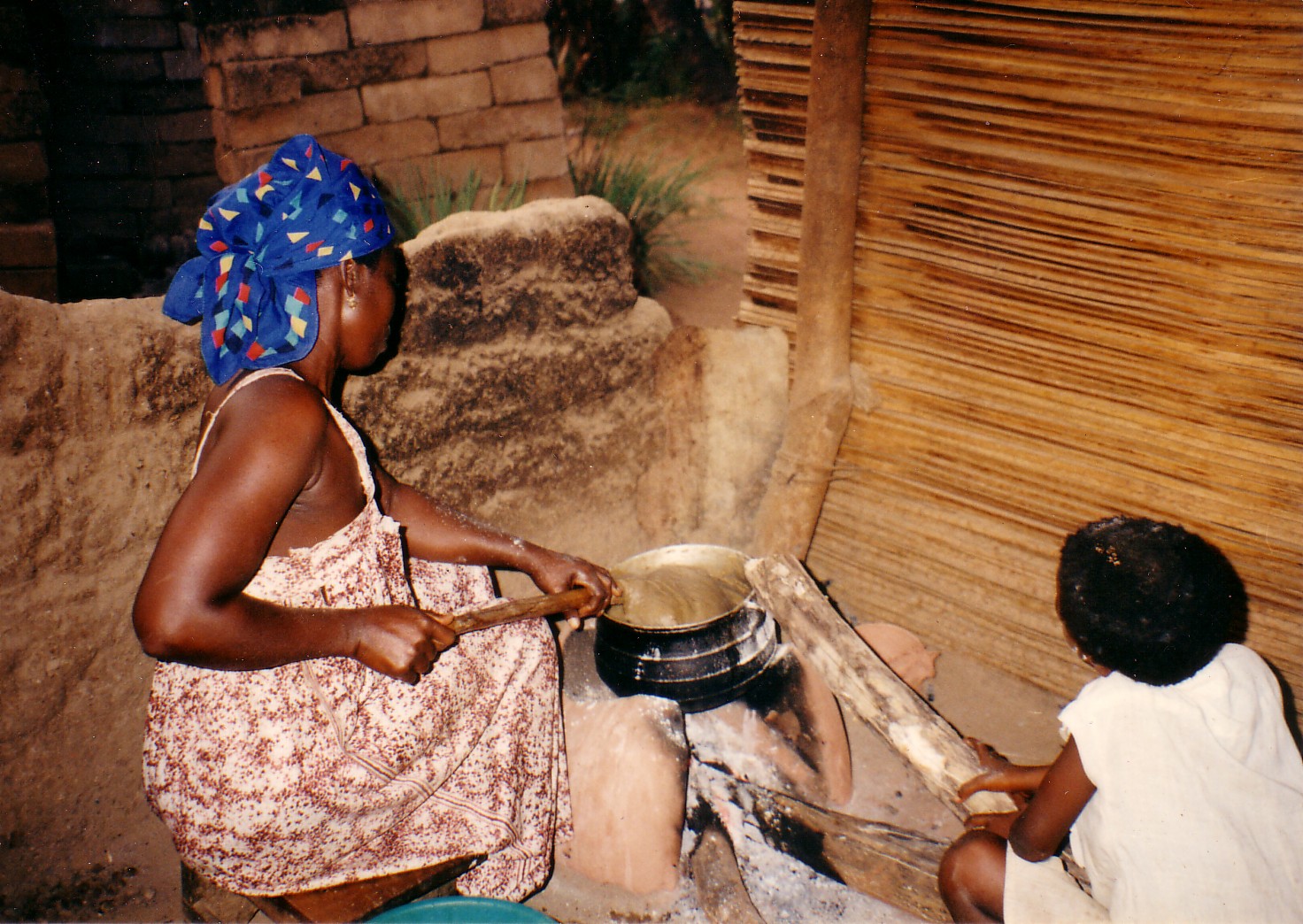 A woman makes her hearth from clay from a termite mound (isin), mixed with palm nut fibres (mbepi).

There is a traditional ritual for breaking up the hearth of a woman following her death. Sometime in the year following the death, her hearth is broken into pieces. Her female friends and relatives carry the pieces to the garbage dump (wunasʋ). When the participants return, her cloths (atati), jewelry (abuto), and dishes (nlɛpɛ) and other personal items are distributed to the women who will inherit them. 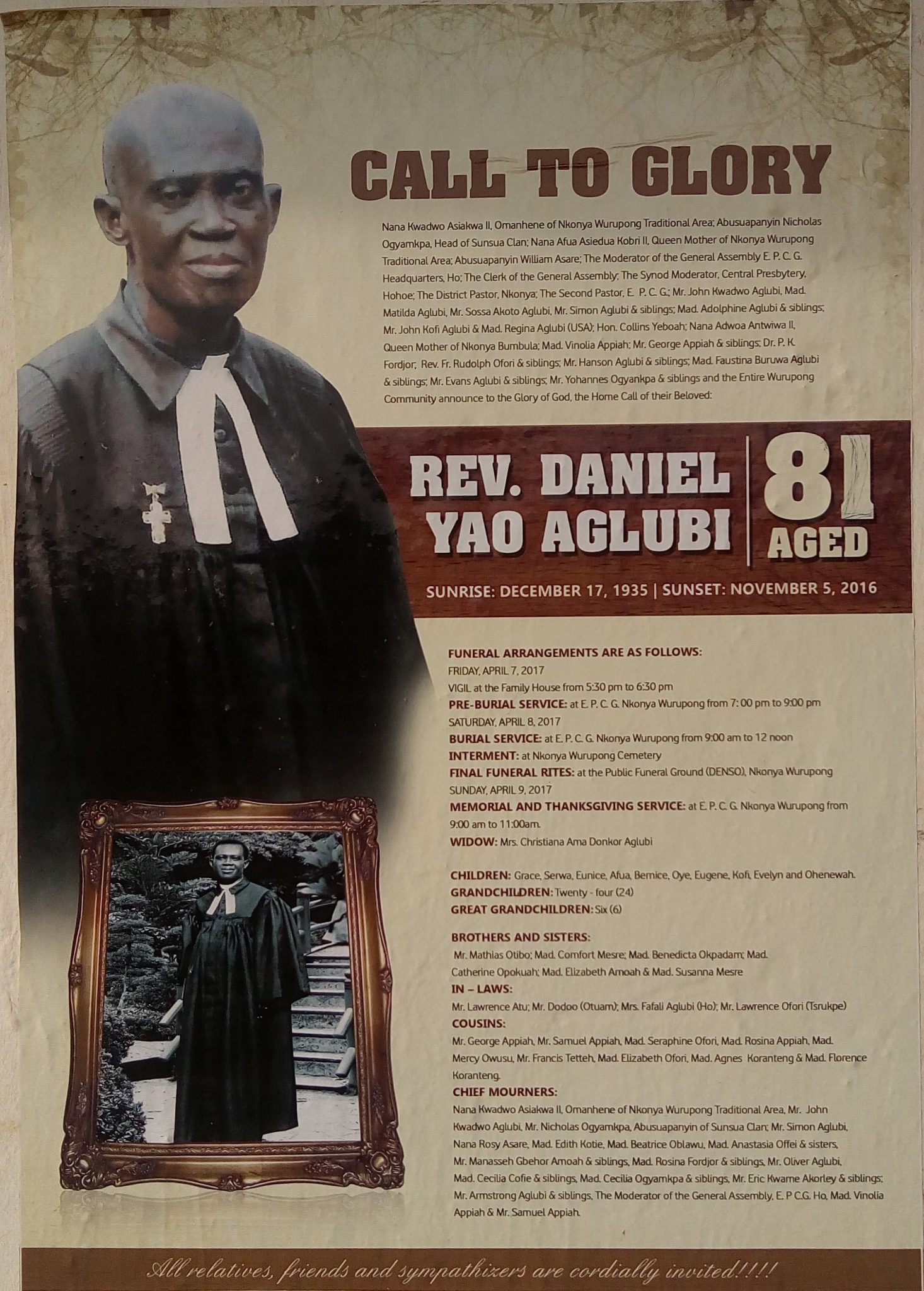 A billboard announcing the funeral of an Nkonya pastor. 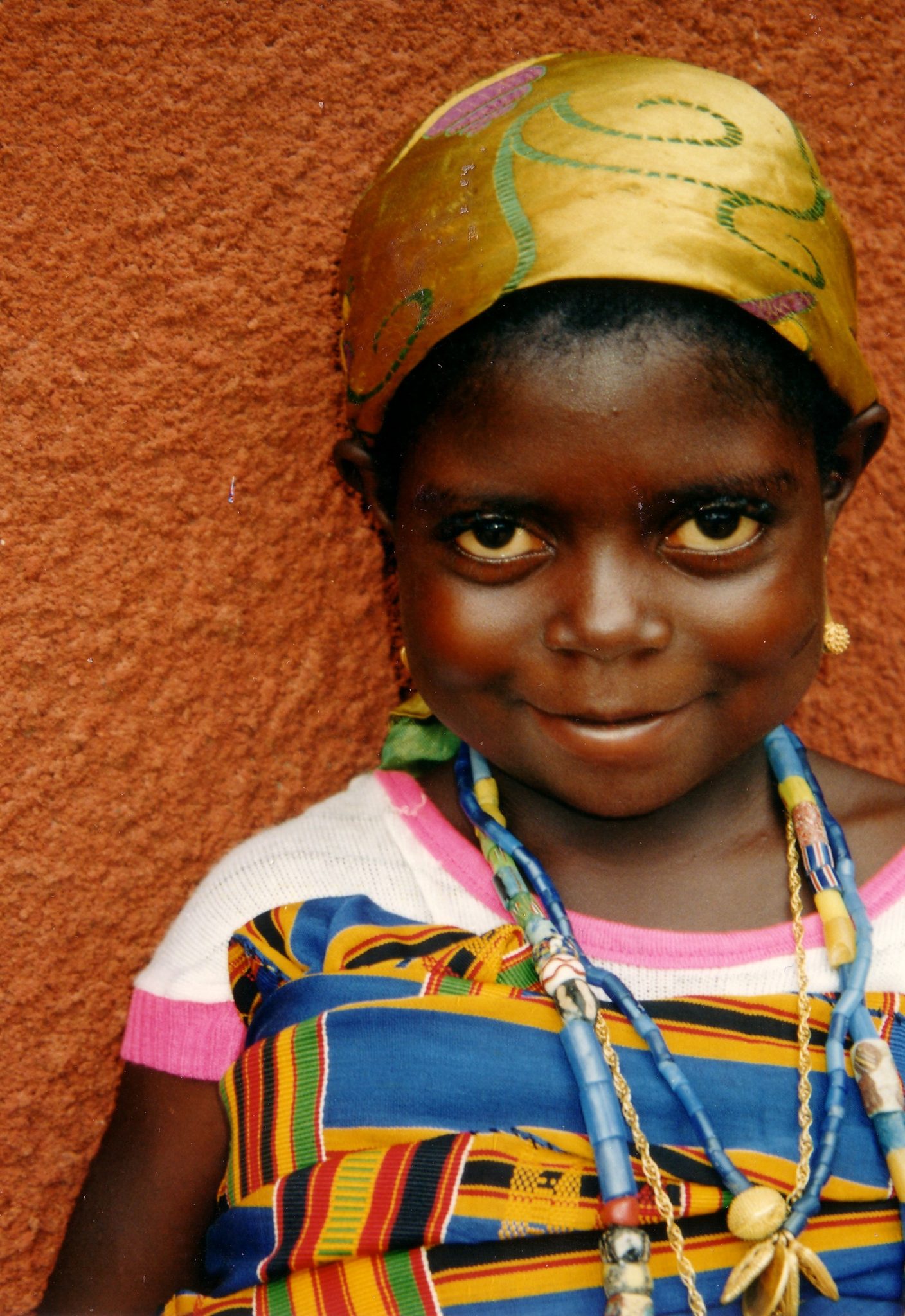 A young girl dressed to represent a deceased female relative. An Nkonya chief supervising the drumming at another chief's funeral.

A common theme of Nkonya culture is the importance of harmonious relationships. This is shown in the following Nkonya funeral song. The lyrics below contain links to the words in the dictionary. The recording below was an impromptu duet recorded in the late 1990s. At that time, songs like this would frequently be sung by Nkonya church choirs at the wake-keeping on the night before a burial. The music at a wake-keeping today will more often be recorded Akan or English hymns or songs played on loudspeakers.

Asi Olu Wa. (Listen here) (The words of lyrics are linked to the corresponding dictionary entries)
Asi olu wa. Nyanpʋsa megyi hwɩɩ
Let us stop hating each other. A human being is nothing
Lowu ma nkɛ; Mlɩha abwɛ apio (repeat)
Death can come any time (Literally, Death has no day). Let us be brothers and sisters.
Nyanpʋsa gyi fɛ afú. Ɔyɔ ɔtra ɔmɛba.
A human being is like the wind. He goes away and will not come again. 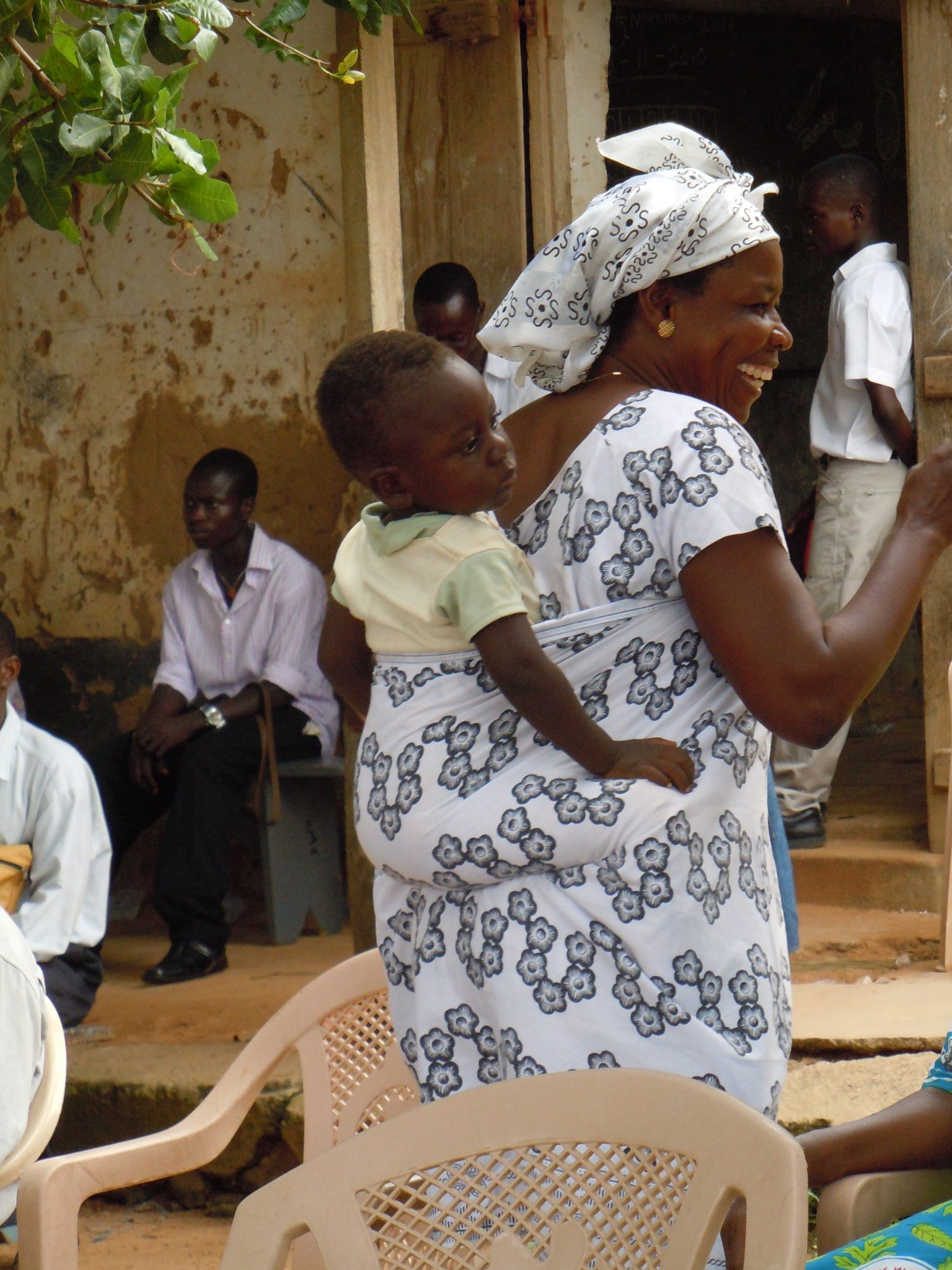 Children are carried (pia) on the back 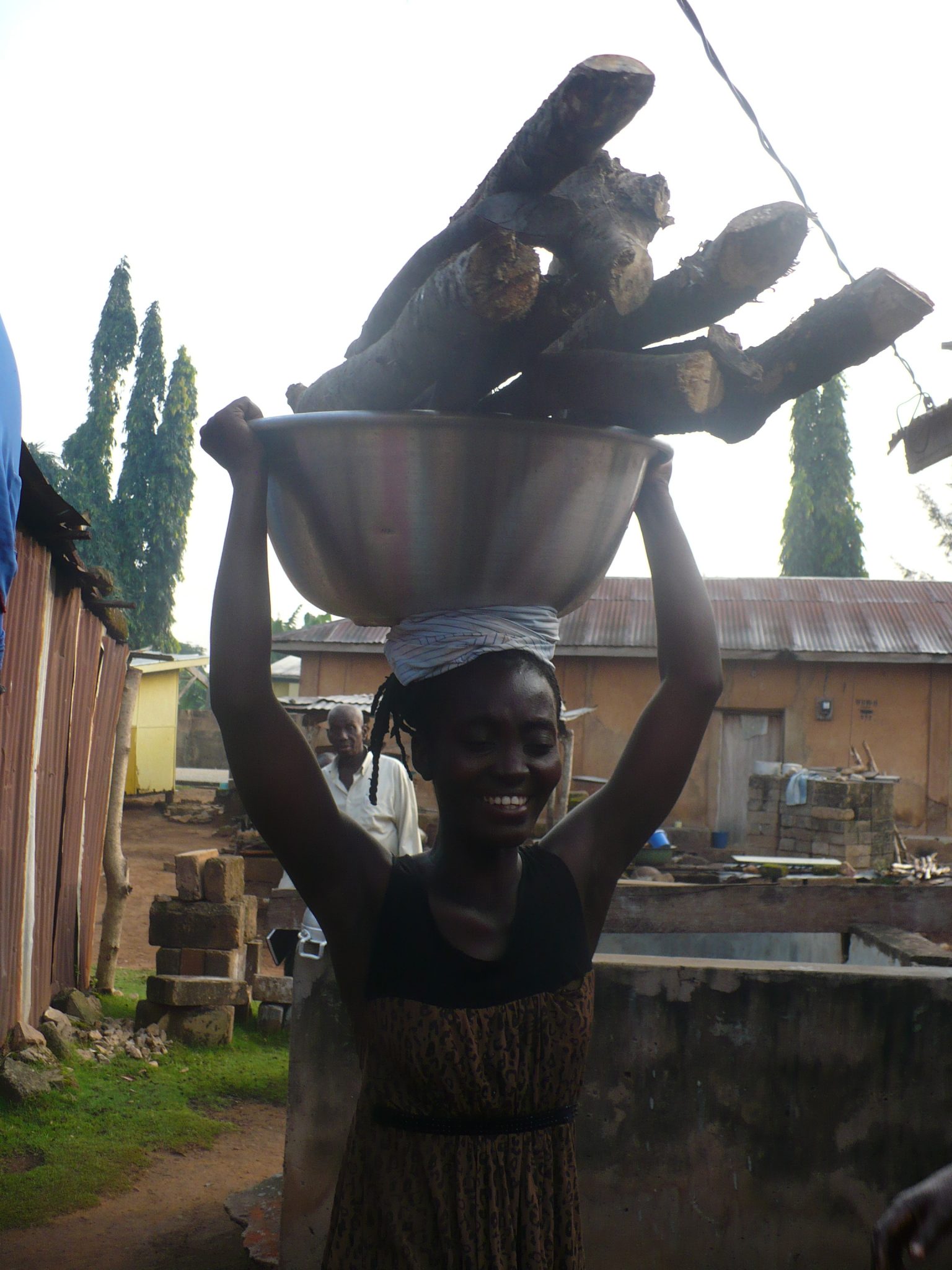 Things are usually carried (sʋra) on the head. 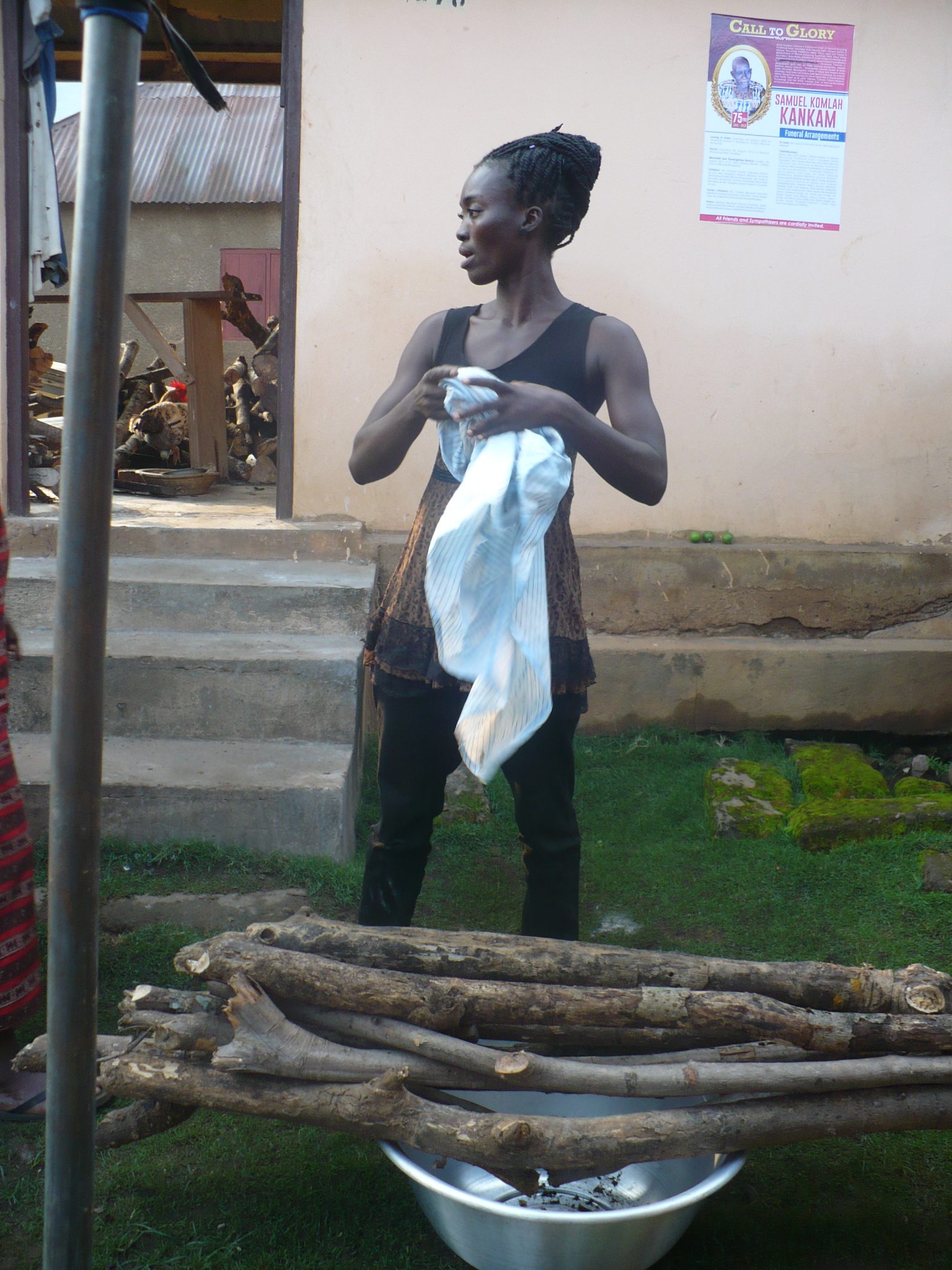 If a load is heavy, people use a rag as a headpad (ɩká). Traditionally, a plantain leaf was used.