Saxwe has a seven-vowel system that includes vowel nasalization. In total, it has seven oral vowels and five nasalized vowels, shown in the following table.

There are twenty-one consonant phonemes in Saxwe. Note that in the following table, allophones are indicated in phonetic brackets below the listing of the phoneme. 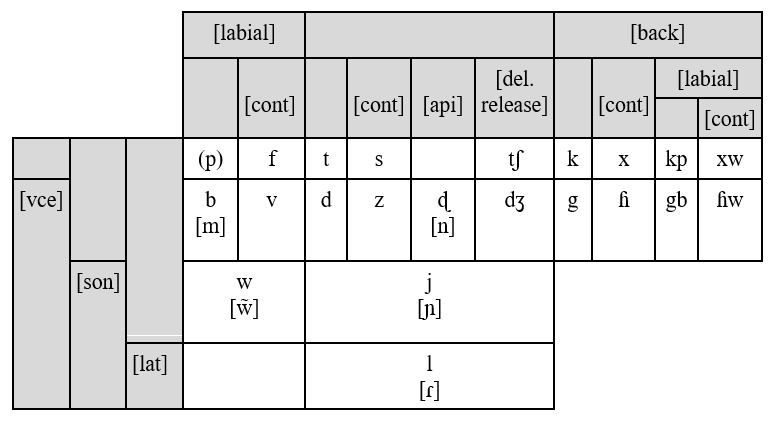 Other notes regarding the phonology

The sound [ɾ] is an allophone of /l/ and occurs following coronal consonants.

The sound [ɣ] is found in a handful of Saxwe words as pronounced by some older speakers and has not been included in the table above. Younger speakers do not have this sound and substitute /j/ or /w/ for it.

The sound marked as [ɖ] is characterized in the related language Ewe by Ladefoged (1964, p. 20) as an apical post-alveolar stop which is articulated with the tip of the tongue against the alveolar ridge. In contrast with this, the sound d is described as a laminal denti-alveolar stop and is articulated with the blade of the tongue against the teeth and alveolar ridge (Ladefoged, 1964, pp. 19–20). The description of these sounds in Ewe matches informal observations of the articulations of these sounds in Saxwe.

The phonemic status of the nasal sounds [m], [n], [ɲ] and [w̃] has long been a source of discussion in Gbe languages. In Saxwe, these sounds appear in complementary environments: [m], [n], [ɲ] and [w̃] precede nasalized vowels and [b], [ɖ], [j] and [w] precede oral vowels. Nasalized vowels, however, are not restricted to an environment in which they follow nasal consonants. A common analysis—and that adopted in the tables here—is that /b/, /ɖ/, /j/ and /w/ are the underlying phonemes. See Beavon-Ham (2019) for more detail.