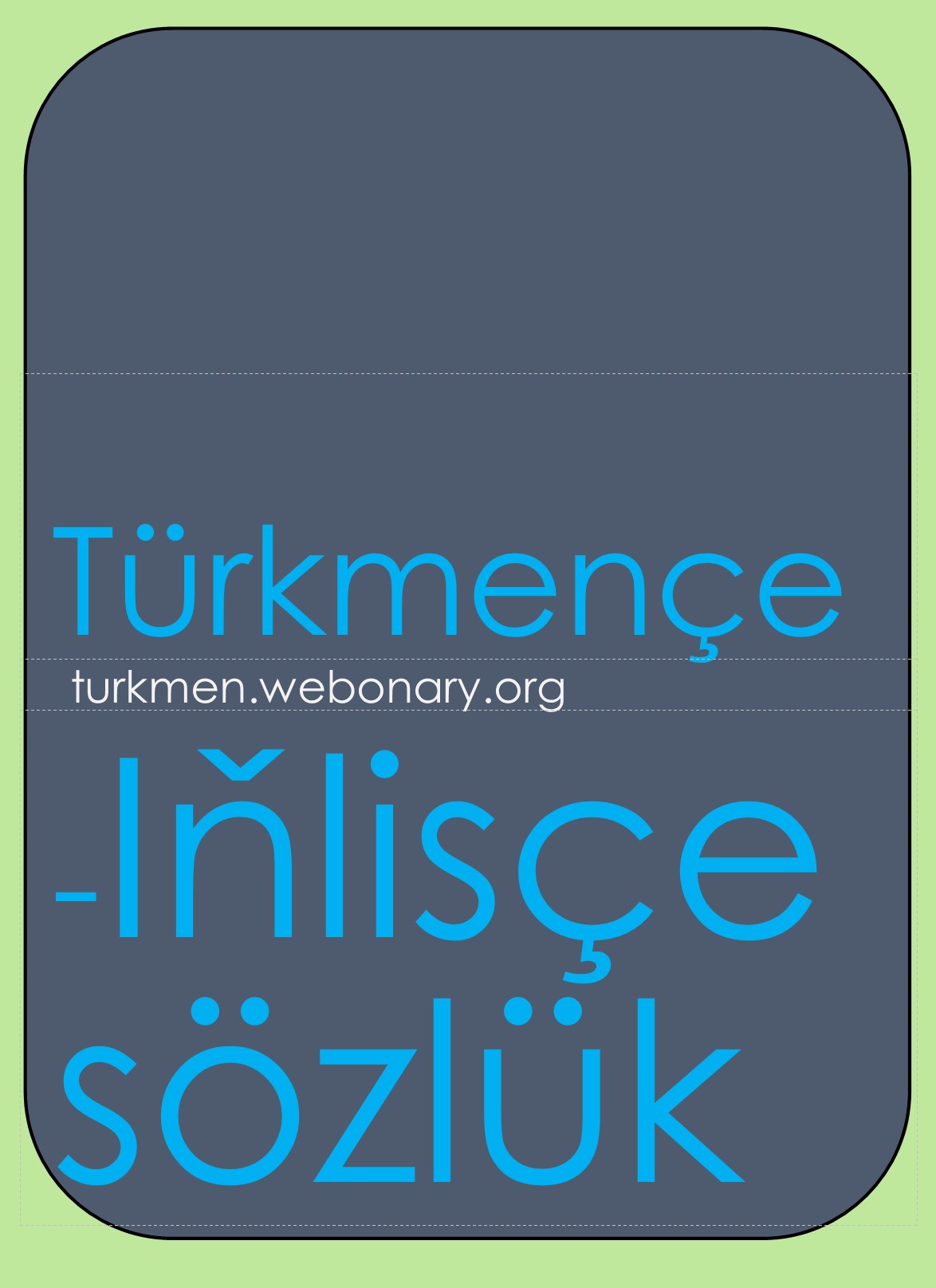 Welcome to the Turkmen-English dictionary! This dictionary has 8,500 head words and many examples. You are able to help edit the dictionary by writing comments under entries - simply click on the 'Comments' hyperlink at the bottom of the page, and type in the box that appears. Please get in touch with us if you want to help out in this way regularly.

Turkmen is a Turkic language, part of the South-Western or Oguz sub-group which also includes Turkish, Azerbaijani, and Gagauz. It is an agglutinative language i.e. it has a highly developed system of noun and verb suffixes that can produce some very long words indeed, e.g. from the word okuw which means ‘study’ the following word/sentence can be derived:

Okuwçylaryňkymyka? – I wonder if it belongs to the school children?

There are over six million speakers of Turkmen world-wide, most of them located in Turkmenistan, Iran, and Afghanistan. Turkmen society is still fairly tribal, so that the Turkmen language is made up of several dialects (the main Turkmen tribes are: Teke, Ýomut, Äsary, Salyr, Çowdur, Gökleň, Norhurly and Saryk). The literary language dates back to the 18th century, with poets such as Magtymguly writing highly stylised works including many Persian (Farsi) loan-words. Modern literary Turkmen is mainly based on the Teke and Ýomut dialects spoken in and around Ashgabat, Mary, Dash Oguz (formally Dashhowuz) and Nebitdag. Although Turkmen residents of the larger cities tend to be strongly bilingual in Turkmen and Russian, any attempts to Russify the literary language have been resisted, although many technical words are Russian or have come via Russian. Dialects spoken in Iran tend to be influenced by Farsi and those in Afghanistan Dari and Uzbek. This dictionary concentrates on Turkmen as used in Turkmenistan.

The Turkmen-English dictionary was begun at Magtymguly adyndaky Türkmen döwlet uniwersiteti in the faculty of foreign languages, and was an attempt to put the other side to the English-Turkmen dictionary compiled by A. Almämedow and R. Nazarow («Magaryf», Ashgabat, 1989). Our Turkmen-English dictionary is already on the web, but needs much work – many of the example sentences are not yet translated, and the sense numbers are therefore best guesses. My belief is that the best way to compile a dictionary is to:

1. Gather example sentences and translate them, perhaps in semantic domains

2. Use the example sentences to work out the translation equivalents

3. Separate all the above into separate 'senses', which are basically translation equivalents.

I would like to give credit to the monolingual dictionary 'Türkmen Diliniň Sözlügi' (Academy of Sciences of the Turkmenistan SSR, 1962, ed. M. Ý. Hamzaýew). A similar dictionary can be found online here:

It has been both an inspiration and also extremely useful in terms of example sentences and natural senses of Turkmen terms.

If you would like to volunteer to help edit the dictionary then please register, login, and leave some comments in Turkmen or English (we might as well keep to those two languages, and try to avoid Russian, since this isn't yet a trilingual dictionary). Below is a Guide to the Language Forge, which is an online dictionary program we use for editing the dictionary.