Netra is presenting final words to the groups.

Diwakar is presenting word collection records of the workshop.

Ladies are taking picture with Mari-Sisko.

After concluding the workshop.

Search for a word in the Western Tamang language dictionary. 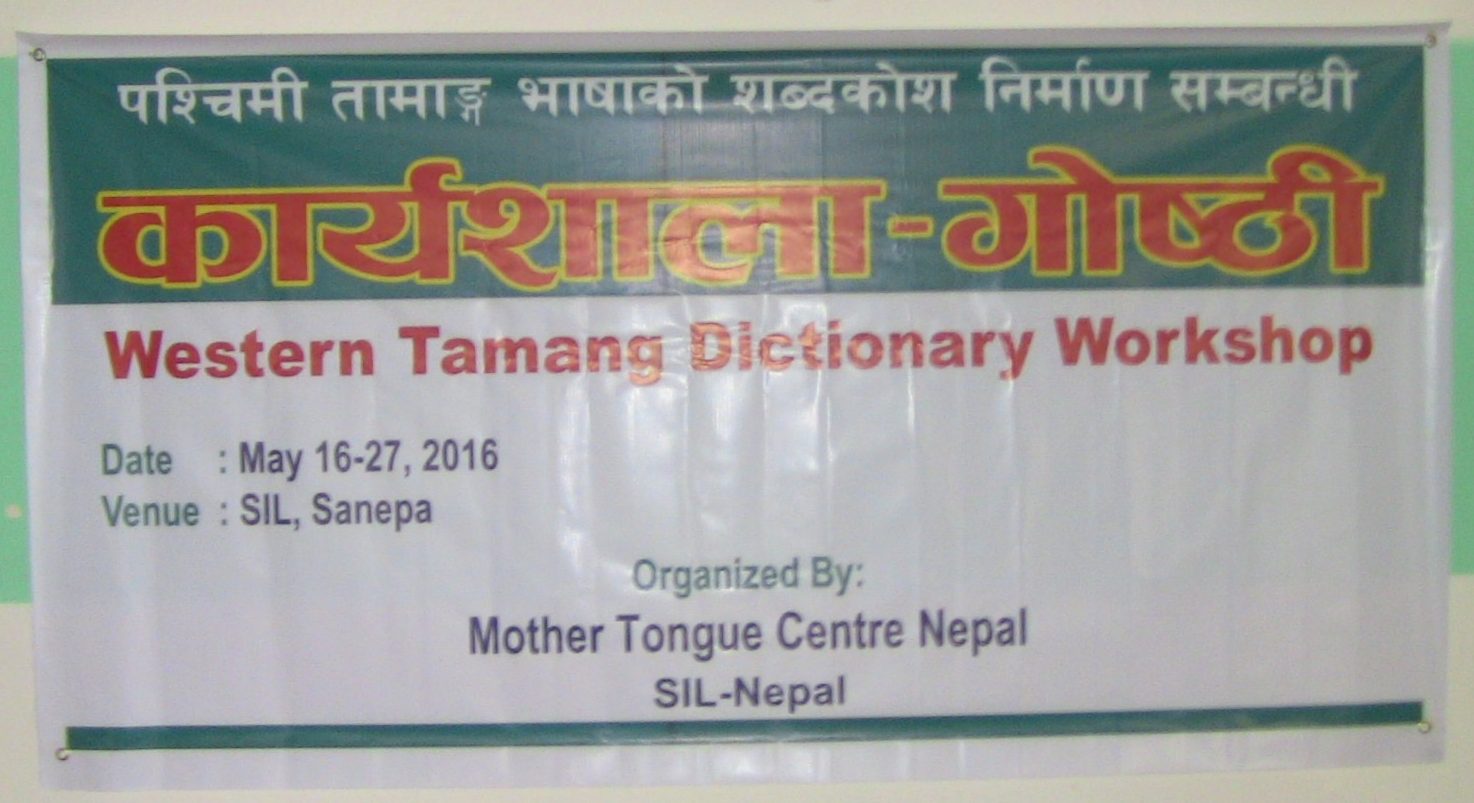 To search for a word, type it into the box on the right. You can search for a word or part of a word in Western Tamang or Nepali. To enter characters unavailable on the keyboard click on one of the buttons above the search box.

[Tip: you can ignore the Languages and Parts of Speech drop-down boxes - they are for advanced searches]

How to search the dictionary

When you click on Search in the menu, you will be able to access the main search function for the dictionary. Here you can enter search terms into the Search box. Clicking the Search button will then search the dictionary for the words that you enter.

You can search on parts of words. If your search consists of three characters or less the search will not proceed (due to the possibility of getting too many results) and you will receive the message:

Because of the brevity of your search term, partial search was omitted. Click here to include searching through partial words.

If you actually do want to search on such a brief item, click on the message and your search will proceed.

When search results are displayed, you will notice that most items are links. If you hover your mouse over a link it will be highlighted with an underline and your mouse pointer will change to a pointed-finger. You can then click on the link. If the link is a:

Doing Thesaurus searches (Not all dictionaries have this feature)

Tamang is a language spoken by the Tamang speech community. In Nepal, the 2011Census  shows that of Nepal’s 123 languages, Tamang with 5.1 percent population has the 5th most speakers. It belongs to the Tibeto-Burman group of the Sino-Tibetan language family. The majority of the Tamang speech community live around the Kathmandu Valley, but the Tamang ethnic group are also found in other districts throughout the country. Identifying the original features of Tamang ethnicity, in 2058 vs the Nepal government listed Tamang as an indigenous ethnic community. In the same vein, the interim constitution of 2063 vs and the recent constitution, 2072 vs, has prioritized Tamang as the  national language.   According to the ‘Do:ra song’, Western Tamang people arrived in Nepal from Tibet and entered through ‘Same’ in the Himalayans. It shows that there are Tamang communities in different places like ‘Rhirhap’ and ‘Gyagarden’, below ‘Bompo’ and ‘Lambu’, and just above ‘Same’. As Lama, Bompo, and Lambu claim that the tail of the Earth lies towards the northern part and the head towards the southern, so in Tamang culture the dead body is taken upwards. The head of the dead body is placed in the south direction before it is burnt. In Tamang culture, it is believed ‘Sa’ as the Earth and ‘me’ as the Tail and hence ‘Same’ is considered as ‘the tail of the Earth’. Furthermore, it is said that there are many changes shifting from the tail to the head.   Lack its own grammar , Tamang seems to have two distinct dialects, eastern and western . The variety spoken towards the eastern part of the Trisuli River originated in the Langtang Himal and is called Eastern Tamang, whereas the variety spoken in different districts towards the western part is called Western Tamang. On this basis, the Tamang of the eastern part is called ‘Syarba’ and that of the western region, (i.e., Rasuwa, Nuwakot, Dhading, Gorkha, Lamjung, Chitawan, and Kanchanpur, is called ‘Nhurba’ or ‘Nhuppa’).   This bilingual dictionary has been prepared with the common effort of the members of the Western Tamang speech community, from Rasuwa, Nuwakot, Dhading, Gorkha, Lamjung, Chitawan, and Kanchanpur. Since the meaning of each Tamang word (i.e. the source language) in this dictionary is given in Nepali as the target language, outsiders may find it useful for comparative study. The bitter fact is that the number of speakers of Western Tamang  is gradually decreasing or shifting to the language of wider communication (i.e., Nepali) due to the direct influence of Nepali, the lingua franca. Giventhis a great challenge to the existence of Western Tamang as a mother tongue,, this dictionary may be regarded as vital to the preservation, promotion, and development of Western Tamang.   Last but not the least, there is maximum possibility to strengthen this dictionary for its improvement, advancement and maturity. The speech community, stakeholders, readers, organizations and other concerned authorities are highly encouraged for the insightful comments and feedback.